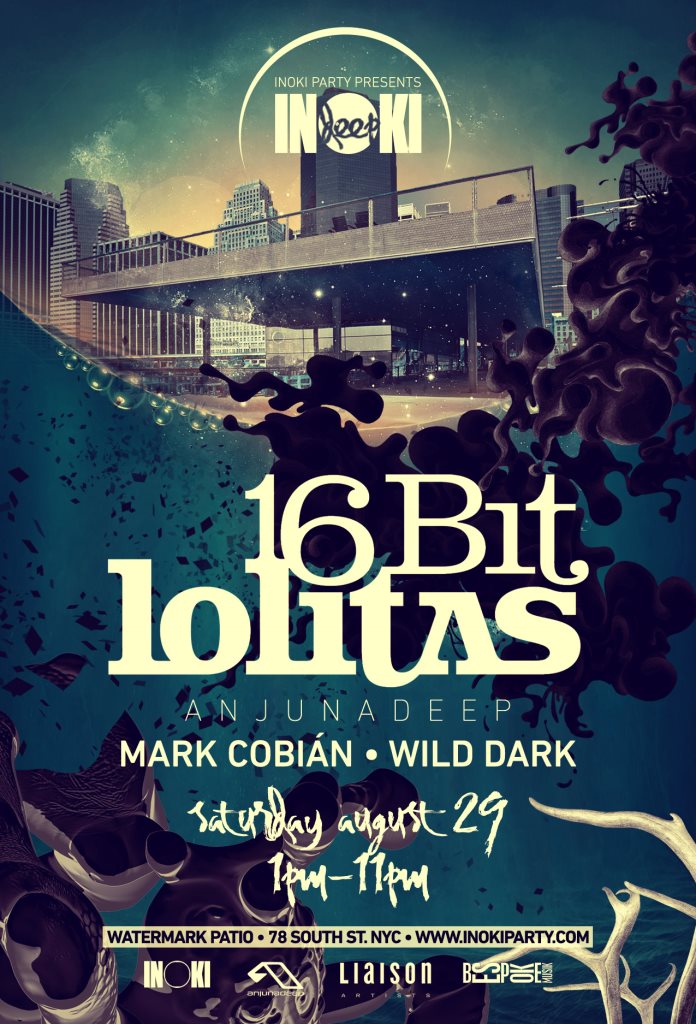 It was our last chance for some fun in the sun before summer came to a close and Inoki Party took advantage of the gorgeous weather to present the debut of their new event series. The Watermark bar was a previously untapped venue in terms of electronic music and they brought a great line up of progressive on deck and we mean deck quite literally. 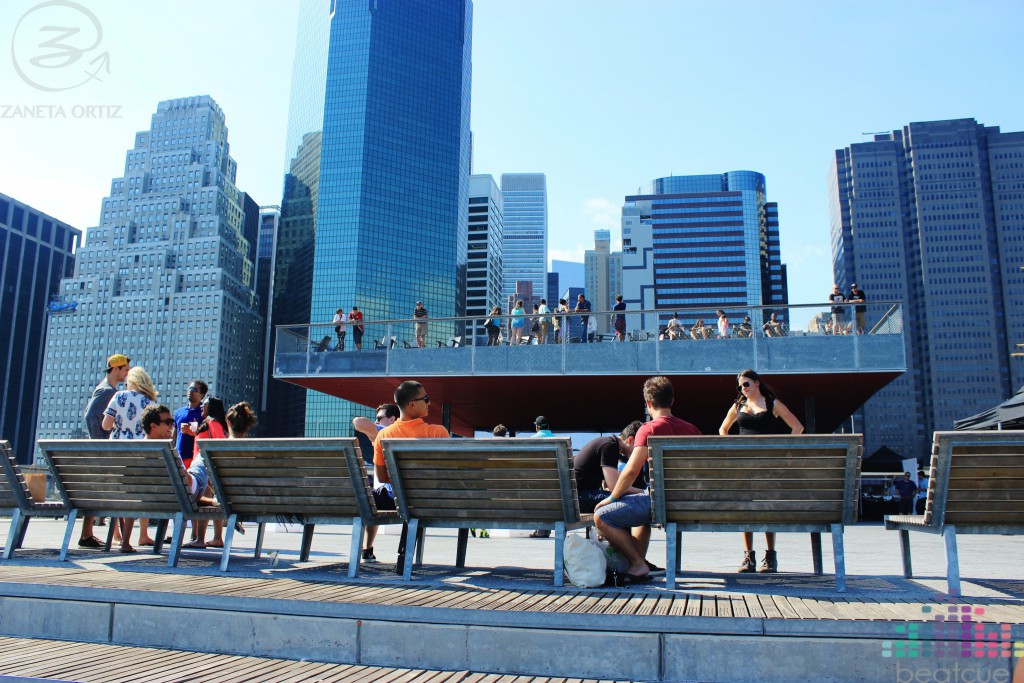 The venue is right on the pier overlooking the east river with stupendous views of the FiDi skyscrapers as well as the Brooklyn Bridge housed right next to the historic Peking ship. Even in the hottest weather you can find refuge in the shade under the deck and feel a nice breeze blow through your hair or lay out in one of their wooden recliners and get some sun kissed skin. If you skipped lunch not to worry; they got you covered. I was surprised to see that their lobster rolls will only run you $15 which is quite competitive in terms of NYC prices. In addition to having a nice selection of bar bites they have Radeburger on tap, the option of bottles as well, and a creative drink menu. 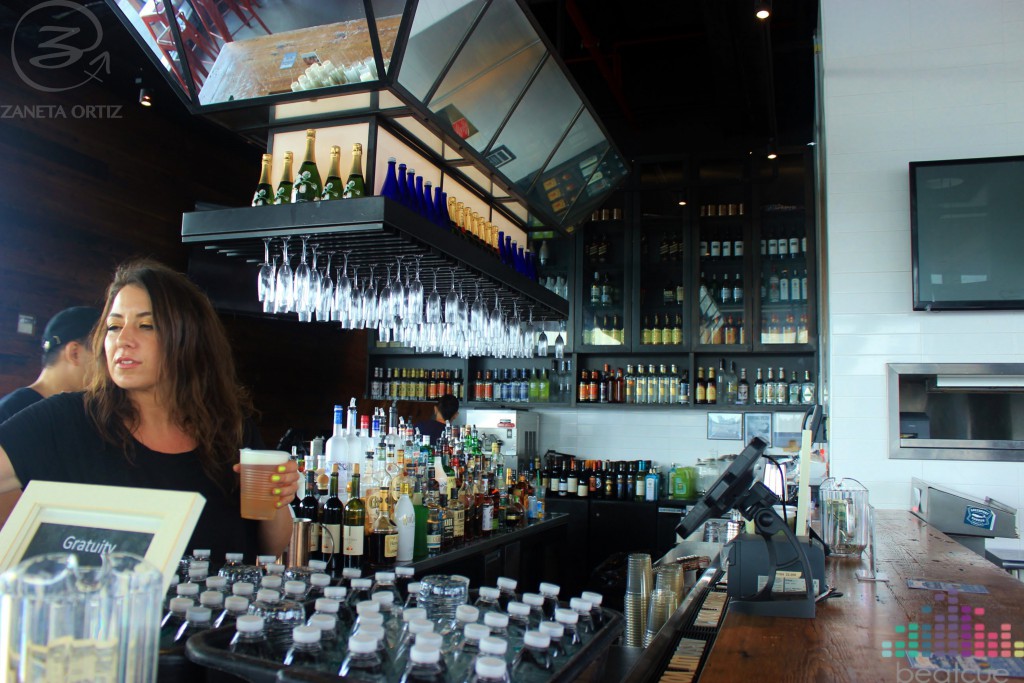 For this particular event they have the indoor bar going as well as tents outside so the crowds would not have to wait in line very long. The downside is that the venue itself shares a bathroom with the Cruise Line next door however the organizers thought ahead and brought in several port-o-potties to ensure the bathroom situation was not an issue. The staff was a team of the friendliest people I’ve encountered. They had a super sweet shot girl walking around with some mixed tropical flavors as well as tequila and fireball. We ran into her quite a few times and each time was more lethal than the last. 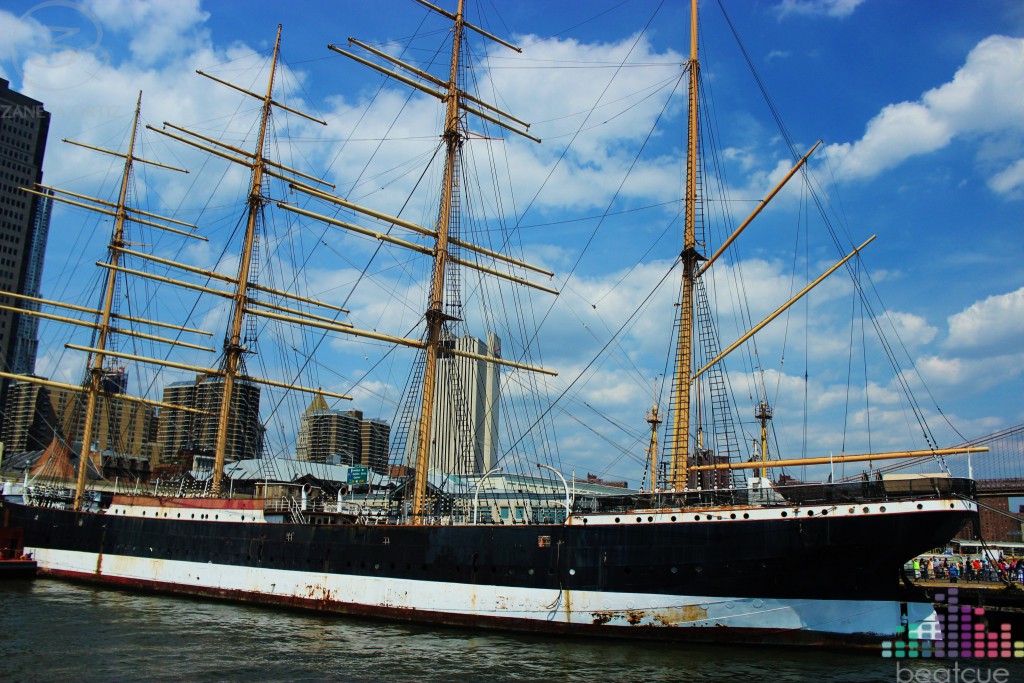 The crowd was really enjoying themselves and there were good vibes all around. We ran into several groups some of which who were just lounging, others meeting up with friends, and some dancing their asses off front and center and it wasn’t before long that this group just got bigger and bigger. Kind of hard not to with the beats these talented DJ’s were pumping out. 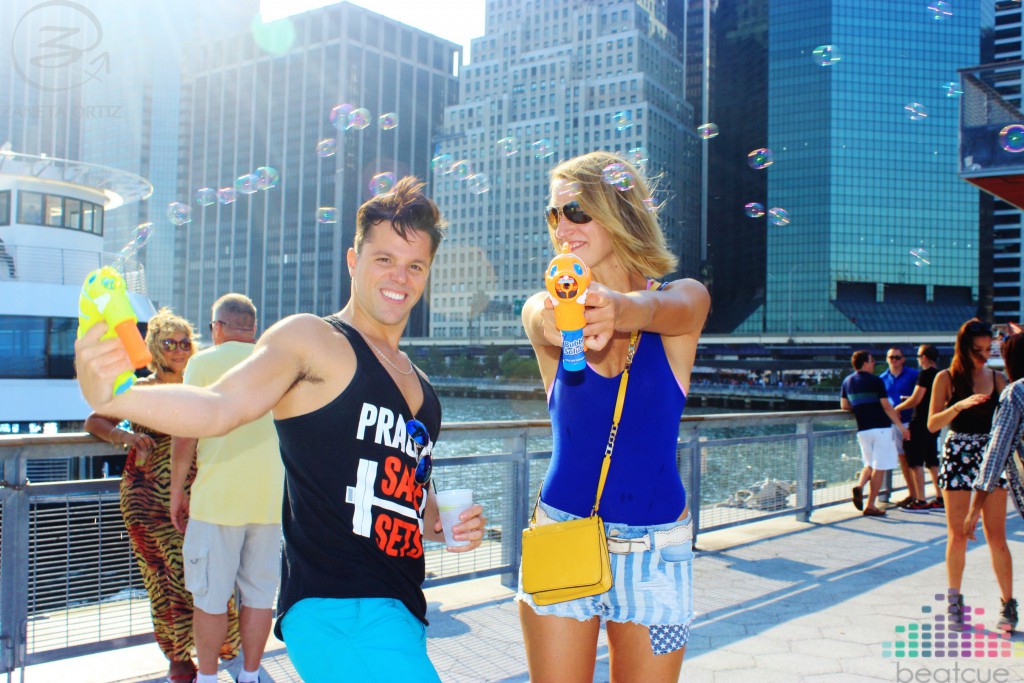 Opening up Sam Allan was on the decks with beats to greet the new arrivals and set the tone for the day. He played a good selection of house tunes with a dash of well known vocal hits in between. Ronny Scar took over for the next two hours delivering the grooves that took the energy up a few notches. At this point the pier was filling up with friendly familiar faces and they were all diggin’ the tunes. The speakers were really thumpin’ too. You’d think since the venue was out on the water you would loose a lot of the sound and acoustics but you could hear everything just fine even all the way out at the end of the pier. 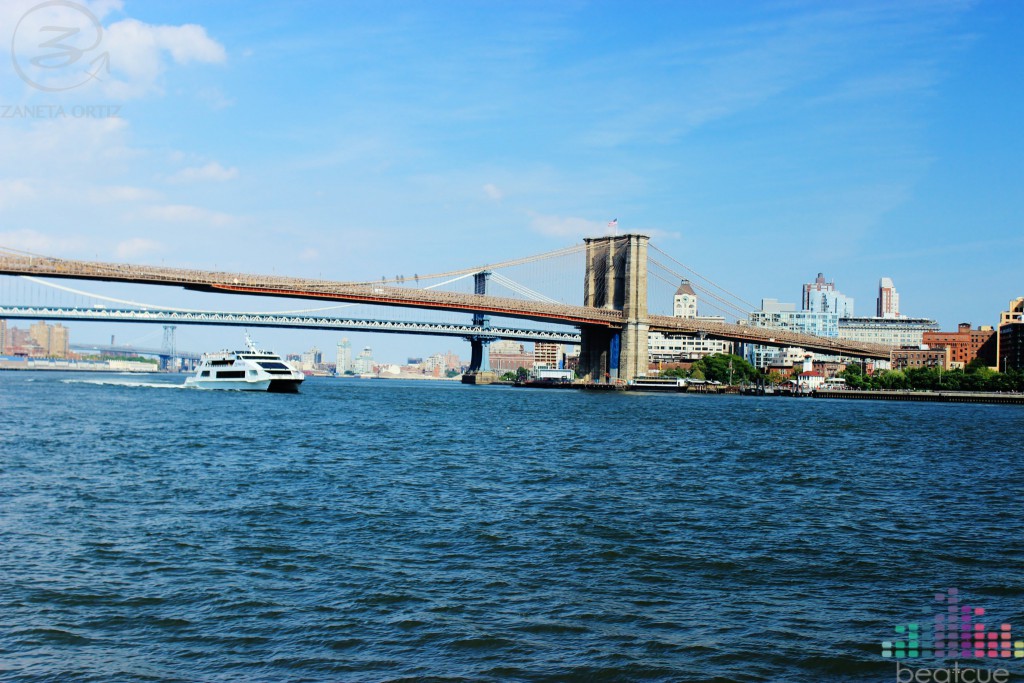 The venue was getting packed and the shot girl made her rounds heightening the level of intoxication all around. Even all the late-comers who’d likely went out the night before had arrived. Now, I don’t usually drink Fireball, but when I do it’s on a beautiful day at a great venue listening to some of the best music NYC has to offer. Mark Cobian was absolutely killin’ it, there were several “holy shit this is a great track moments!” Mark is definitely making his Mark, (no pun intended) as one of the strongest locals we have to offer. I would have been perfectly content with him being the headliner all night. Yes, it was just that good; but then again he always delivers. I don’t think I’ve caught a bad set from him yet. You can really tell her strives for perfection based on his carefully selected arsenal of dance floor bombs. On-lookers gazed on at all the fun we were having as they waited for their cruises/water taxi’s to arrive. We were the envy of the entire South Street Seaport. You know this is a bangin’ party when you get a random appearance by David Blane performing card tricks right on the dance floor. 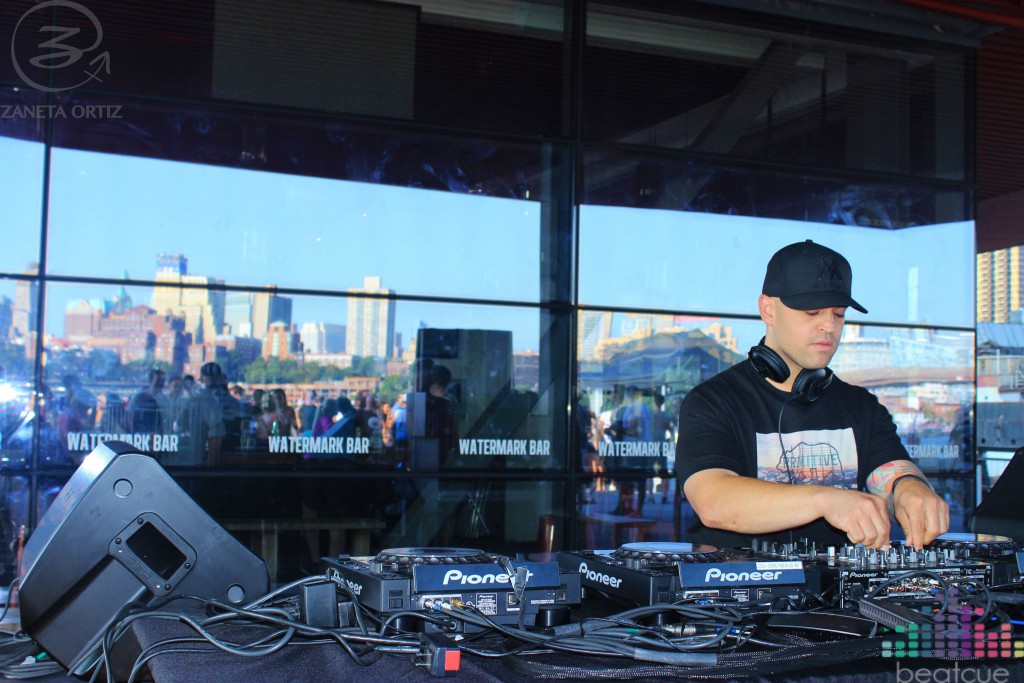 An now for the anticipated moment we were all waiting for Ariaan Olieroock of 16 Bit Lolitas made his appearance. Although the 16 Bit Lolitas are a duo along with Ariaan’s production partner Peter Kreik only one of them travels to the gig’s as the case is with most duo’s. Can you believe it’s been seven years since their last visit to NYC? We can’t either! Just to drop a little history on those who are a little late to the game; 16 Bit Lolitas first made their New York debut with Made Event at Cielo in April 2008 and then made a speedy return 6 months later to play a party at Le Poisson Rouge hosted by Global Frequencies. I’m really not sure what took so long to get them back but I am very glad that Inoki Party selected them as the headliner for this event because their sound fit together so well with this fun occasion. Ariaan played on just as the last few rays of the sunset disappeared giving all the partygoers who endure the sun for several hours their second wind. Nightfall spun these dancers into a nocturnal frenzy while some 16 Bit Lolita’s crowd favorites played on including “Deep In My Soul”. 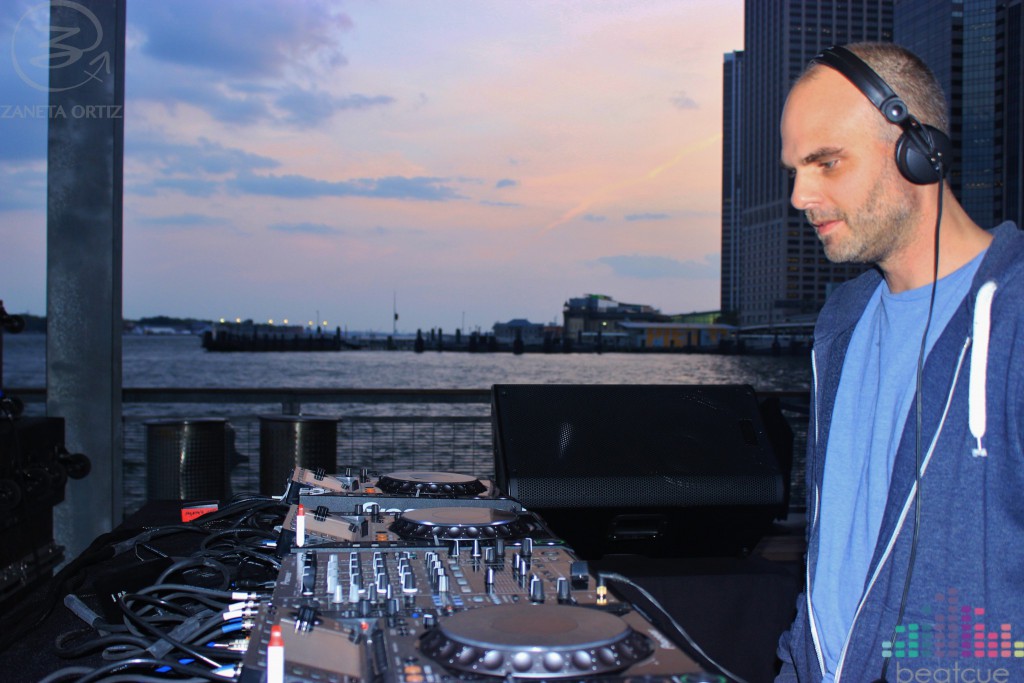 To close out a very successful evening and a marvelous debut event was Wild Dark who played through keeping everyone going until the very end at 11PM. Inoki Party did a stellar job and we are definitely going to keep an eye out for more of their upcoming events! 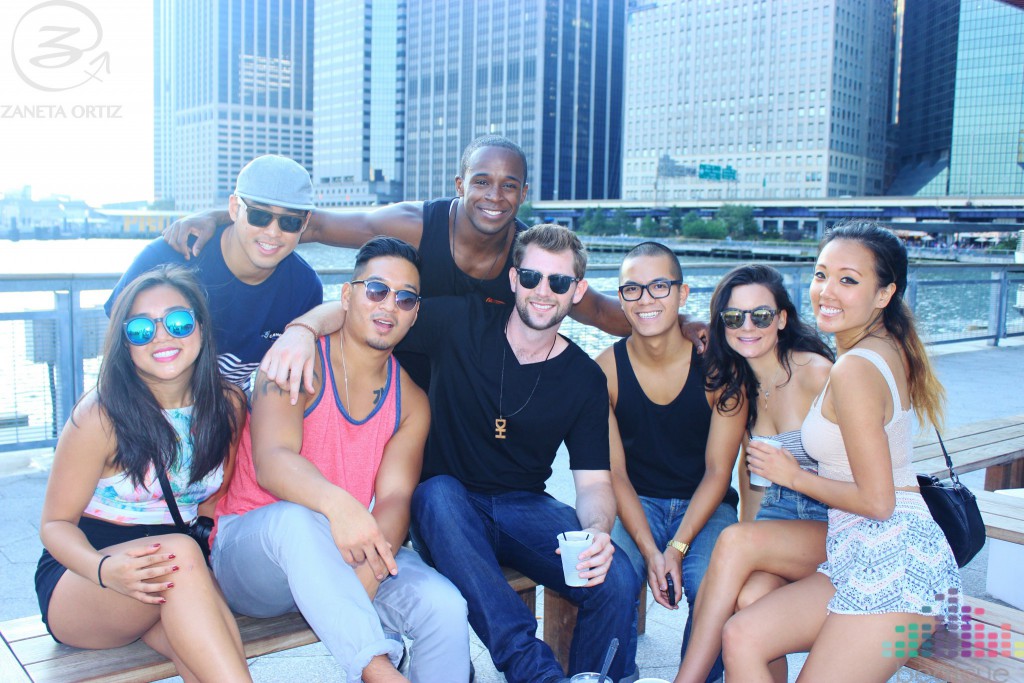 16 Bit Lolitas & INOKI:Deep take us behind the scenes of NYC & their next big show