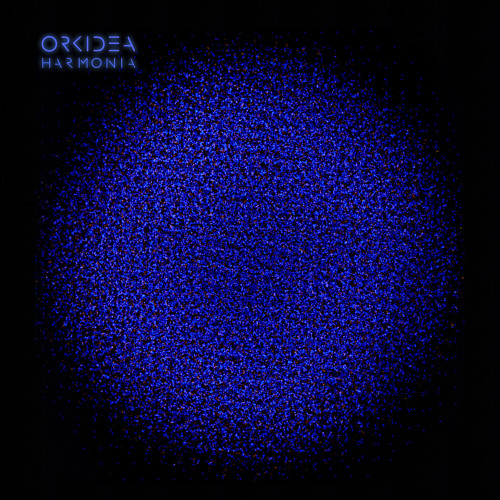 If there’s a term that captures to the nth degree the music of DJ, composer and master-producer Tapio ‘Orkidea’ Hakanen, it’s ‘retrofuturism’. Passing from simple terminology to his own personal genre playground, its past-meets-the-future melange is the driving ethic behind every piece of music he makes.
It sees him inhabit a remarkable & singular position in electronic music. Remaining anchored to its underground, he nonetheless enjoys the type of esteem typically reserved for the biggest trance stars of stage & studio. Notable by their cache of rarity, ‘Harmonia’ is just the fourth in Orkidea’s album line, throughout his near-¼ century of electronic music creation.

Following previous long-players (‘Taika’ – 2003, ‘Metaverse’ – 2008 and ’20’ in 2011), the album continues to track the inspirations of a man who has himself gone on to influence numerous subsequent production generations.

Stretching the album’s genealogy further back still, with ‘p:Machinery’, Orkidea realigns avant-garde group Propaganda’s mid-80s synth-pop classic with modern day floors. Building it up & out with the driving, tech style of Pryda and the peak time prog hooky-ness of Anjunadeep, he gives it a radically inventive update.

Tapio continues to swim in the 80s pool with the Sami Uotila-sung ‘Strange World’, which takes vocal cues from the music of New Order and The Human League. Already a single triumph in it’s own right, on ‘Revolution Industrielle’ he brilliantly, assuredly transforms Jean-Michel Jarre’s classic into a brooding, thunder-some titan. Utilizing masterful chord transposal and emotion-spiking Roland D-50 synths, he ring-fences the original’s feel & drama.

On ‘Harmonia’ release, Orkidea said: “I’ve channeled over 20 years of DJ & production history into this album. It feels like a natural continuation after ‘Taika’, ‘Metaverse’ and ‘20’, but at the same time takes my sound to a new level. It’s the most dynamic and varied record I’ve done, yet at the same time the most cohesive crystallization of my musical expression. And I believe it offers something unique for the progressive & trance genres with its retrofuturistic sound.”

‘Nana’ introduces a techy Filterheadz-like groove to the album, folding it into a joyful Afro vocal. Every bit as pumping, ‘Redemption’ brings darker, more shadowy ether to the album.

Recent single smash ‘Purity’ is next to unleash its thrall, setting up ‘Harmonia’s final act. Having drawn major deck & radio rotation from Armin van Buuren and other A-listers, press-side it was scored a red-hot 9.5/10 by Tilllate Magazine. The UK’s DJ Mag meanwhile portrayed it as nursing a “doomy dash of ‘Bladerunner’ with several tablespoons of ‘Oxygène’”.

With Pure Trance at its core, on ‘North Star’, Giuseppe Ottaviani and Orkidea’s angle the trajectory up into the 140bpm regions. With the album’s climactic numbers, more psy-trance elements seize the centre-ground, as Orkidea and UK producer Activa fashion the equatorially humid coding of ‘Z21’. Programming more psy into its drums & percussion, the album’s title track injects a dash of Vangelis to its upper atmosphere, courtesy of Rutger Hauer’s fitting, closing monologue from Blade Runner.

Originally written for ENL by Starkprofilespr

Lowland – We’ve Been Here Before